"Well, you're an odd fellow but you write a good game" - Erika Chappell

Look, some people have good, reasonable solutions to their trivial problems.

Some people are boring.

It is meant to emulate the eponymous Simpson's episode or shows like Blackadder.

In order to download this game you must purchase it at or above the minimum price of $2 USD. You will get access to the following files:

Support this game at or above a special price point to receive something exclusive.

Every copy of Steamed Hams you purchase makes a copy available for people who can't budget for it at its standard price. Please feel free to grab one of these free copies for any reason.

Additionally, due to the current crisis I've added twenty additional community copies to the stock.

It should just be a meme, except somehow it not only works but is also really good.

You play with a group, with either two people as the focus and everyone else as the GM, or with multiple people as the focus and only one GM. Like the Simpsons bit, you're trying to bluff your way out of a situation as it spirals further and further out of control, but the game doubles down on this by giving you significant bonuses the more you push the situation towards chaos.

It's only a page of rules, but they're clear, easily readable, and well organized, and I didn't spot anything that looked like it was missing.

As a one-shot comedy game, I think I would recommend this to any group.

STEAMED HAMS is a quick, one page RPG about telling a wild story. Your characters solve problems by coming up with absurd solutions, and the more ridiculous your plan is, the higher the chance you would succeed. I have been in RPGs before where players argue forever about minute details of a plan, things got dragged out and nothing is put in motion. This is the exact opposite, and sounds very fun. 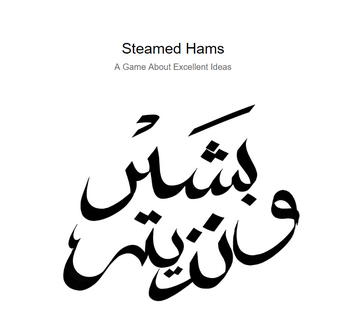